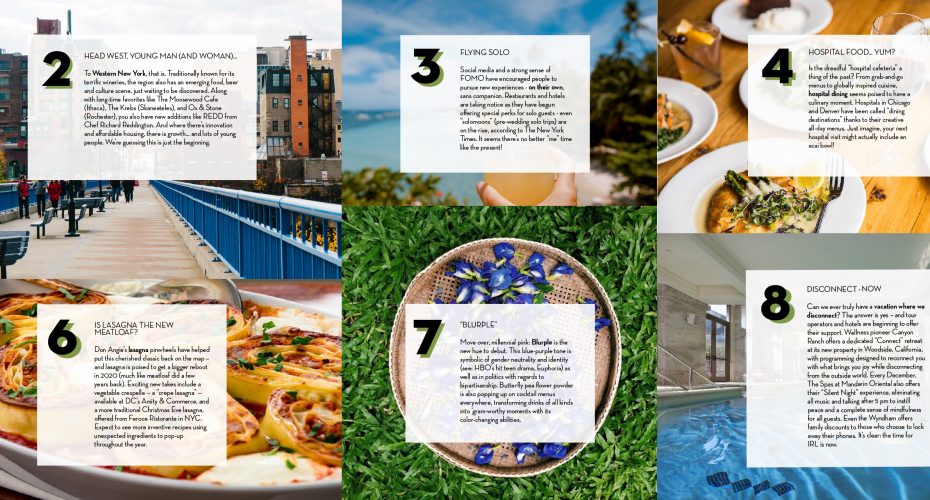 While we are certainly not taking credit for these trends, in 2012, we pitched an editor a story on how “donuts are the new cupcake” — and then they unseated cupcakes faster than you can say “Magnolia Bakery.” In 2018, we had an inkling Taiwanese food and Japanese-style sandos were going to get some buzz — and they went on to become some of the hottest food trends in 2019. And Cosmopolitans? We sensed that they would be back… and now you can find them on menus again.

Now, as we get ready to enter a new decade, here’s what we think will be big in 2020 and beyond based on the microdata…

As the plant-based movement continues to gain more ground going into 2020, the littlest things are going to be the biggest players. Beans, a stalwart of many a meal, are the newest oldest ingredient to be found on menus, even at places like Bareburger and Qdoba. Fava, mung, and heirloom beans (among others) are gaining attention for their high protein content and versatility.

West African grains, like the nutritious staple fonio, are favored by West African farmers for being a stable source of sustenance in times of climate change. It’s also gaining a foothold on restaurant menus in New York City, at places like Teranga, Dimes and even The Dining Room at The Metropolitan Museum of Art. As the availability of fonio increases, it will also help support the economic livelihoods of these farmers and their families.

Lastly, hemp seeds continue to see an uptick in popularity thanks to their nutty texture, high protein and Omega-3 levels, and low-carb content, making the ma perfect meat alternative ingredient. At Bubby’s in NYC, for example, hemp is even used for syrup infusions in cocktails.

Drive west and north of Hudson Valley and you’ll hit the Finger Lakes — a gateway to the bounty of Western New York. While traditionally known for its terrific wineries (particularly the spectacular Rieslings), the region is more than just beautiful glacial lakes and delicious wine — there’s a world of food, beer, and culture waiting to be discovered, and now is the time.

Ithaca, often dubbed “the town that time forgot,” has always been known for its access to agriculture, and is home to favorites like The Moosewood Café. The original Dinosaur Bar-B-Que is in Syracuse, and The Krebs, a long-celebrated restaurant, still stands in Skaneateles.

But keep heading west and you’ll discover the wonders of Rochester, the third largest city in New York state. Kodak and Xerox may have moved out of town, but small, innovative companies have taken their place. Chef Richard Reddington, who gained recognition in great kitchens on both coasts and abroad, moved back home to Rochester this year. He opened REDD, the latest restaurant to hit this on-the-cusp city, joining other terrific spots like Ox & Stone, Good Luck, and Vern’s. According to Governor Cuomo, Rochester is the fastest-growing real estate market in the state right now — which means more restaurants are sure to crop up, and that also means that the wine and beer (Genesee!) will always be flowing. And where there’s innovation (think Austin), culture (see: Pittsburgh or the Berkshires), and affordable housing (Detroit, anyone?), there is growth… and lots of young people.

We’re guessing this is just the beginning, so we’ll start planning our visits even further west, shuffling off to Buffalo the first chance we get.

IS LASAGNA THE NEW “MEATLOAF”?

Much like how meatloaf had a moment a few years ago, thanks in part to the release of Frank Bruni and Jennifer Steinhauer’s A Meatloaf in Every Oven, lasagna too is poised to get a reboot in 2020 with some exciting takes on the layered noodle classic. With help from an eponymous cookbook, Lasagna by Anna Hezel, the baked pasta dish branches out with new recipes for Fried Lasagna Bites, Carbonara Lasagna, Meatball Lasagna, and even Nutellasagna (!) to get you through sweater weather.

Out in LA, diners have loved Nightshade‘s Mapo Tofu Lasagna, while in NYC, carbo-loaders still can’t get enough of I Sodi‘s Lasagna Carciofi, and Don Angie‘s Instagram-famous Lasagna for Two. Amity & Commerce at Mandarin Oriental, Washington D.C. also offers a Vegetable Crespelle that’s essentially a “crepe lasagna,” as a lighter take on the classic with layers of crepes, zucchini, sheep’s milk ricotta, ragu and breadcrumb gratin.

In the year ahead, expect to see more inventive recipes using unexpected ingredients to pop up throughout the year.

Digital media has connected the world like never before, inspiring people to experience new adventures — and these days, with or without a companion. With such curiosity (and likely an acute sense of FOMO as a strong motivating factor), people are embarking solo to pursue their interests while also getting some “me” time. The Wall Street Journal reports that Americans now eat nearly half of their meals alone, and as solo dining becomes the new normal, restaurants have no choice but to step up their game, offering solo diners special perks and off-menu items.

Hotels too are increasingly coming up with creative ways to engage these travelers as well. Miami’s Circa 39 hotel, for example, came up with a “Solo at Circa” package, providing guests with a special meet-and-greet with a hotel employee to get connected on hotel happenings. Then there’s the “solomoon,” as reported by The New York Times: pre-wedding solo trips meant to reconnect with oneself, before tying the knot.

Clearly, there’s never been a better time to fly solo, with more hotels, resorts and tour operators looking to cater to the lone traveler in new and exciting ways.

Move over, millennial pink: “Blurple” is the new hue to debut. The rise of this gender-neutral color is, in part, a response to nationwide conversations surrounding gender identity — perhaps seen most predominantly this year in HBO’s hit series, Euphoria, highlighting reflective moments and characters in turmoil, while also being a nod to the gender fluidity of the characters. It’s also previously been considered a symbol of bipartisanship, representing a combination of Republican “red” and Democratic “blue.”

Blurple is also seeping into our menus, thanks to the widespread use of butterfly pea flower powder. Traditionally favored for their blue petals for teas and Southeast Asian cooking, mixologists and baristas are also inspired by the ingredient’s magical color-changing properties (as a result of changes in pH levels). Whether it’s the The Painted Houses cocktail at Lazy Betty (Atlanta, GA), or Purple Rain at Madison (San Diego, CA), or even Starbucks’ limited edition Butterfly Pea Lemonade Cold Brew, these “blurple” drinks are creating ‘gram-worthy moments to surprise and delight guests.

Forbes recently wrote that technology has sucked the romance out of our vacations — and we couldn’t agree more. Can we ever truly have a vacation where we disconnected? The answer is increasingly “yes,” as tour operators and hotels are beginning to offer their support to help travelers slow down, unplug from technology and its endless distractions, and live in the moment.

Wellness pioneer Canyon Ranch offers a dedicated “Connect” retreat at its newest property in Woodside, CA, with programming designed to reconnect you with what brings you joy while disconnecting from the outside world. Mandarin Oriental Hotel Group, known for their Digital Wellness Escape spa treatments, also offer the “Silent Night” experience across their spas every December, eliminating all music and talking after 5 PM to instill peace and a complete sense of mindfulness for all guests. Even Wyndham Hotels offers a Disconnect to Reconnect program, giving traveling families a discount in exchange for locking away their phones, after survey results showed that 54 percent of children believed their parents check their phones “too often,” and 32 percent saying that they felt “unimportant” when their parents were distracted by screens.

The time for IRL is now – because we can all use a little “me” time, selfies excluded.

Is the dreaded “hospital cafeteria” a thing of the past? From grab-and-go menus to globally-inspired cuisine, hospital dining seems poised to have a culinary moment. An increasing number of innovative options are popping up in hospitals across the U.S., turning old-school cafeterias into dining destinations.

Castle Creek Café, located inside Aspen Valley Hospital, is often described as “the best kept secret in Aspen,” offering patients “room-service” style dining as well as a more traditional restaurant experience for both visitors and locals. Similarly, Beatrix, a popular Chicago café and restaurant, has a location and market at Northwestern Memorial Hospital, serving an imaginative and healthy menu throughout the day. And because the restaurants are subsidized by the hospital, they can offer high-quality food at more affordable prices compared to conventional restaurants — which means restaurateurs have been taking notice and throwing their hat (and recipes) into the ring. Just imagine, your next hospital visit might actually include an acai bowl!

BUZZWORD: OVERTOURISM. WHAT TO DO? DISCOVER THE UNDISCOVERED.

Traveling far and wide is glamorous — but the environmental and social effects of “overtourism”? Not so much. Essentially defined as an overcrowding of tourists to a destination, the issue has steadily gained awareness as a growing concern. Subsequently, more travelers are looking for offbeat destinations with new stories to tell, to help alleviate the pressure off of more congested areas and bring attention to lesser-known neighborhoods in need of a boost.

Japan National Tourism Organization, for example, is actively promoting lesser regions to disperse travelers to places like Kumamoto Prefecture in Kyushu, or Akita Prefecture in the north, showing that Japan has more to offer beyond the overcrowded cities of Tokyo, Kyoto, and Osaka, with equally authentic experiences. Other destinations are utilizing the trend to change where tourism dollars are spent: Puerto Rico is shifting away from focusing on cruise travel and is instead promoting longer stays in communities where tourism dollars will have a direct impact, as part of a larger strategy to continue post-Hurricane Maria recovery.

With more travelers seeking new experiences that haven’t been “‘grammed to death,” as well as developing a better understanding of the environmental impact of their visits, it’s never been a better time to focus on tertiary cities and “hidden gem” neighborhoods.